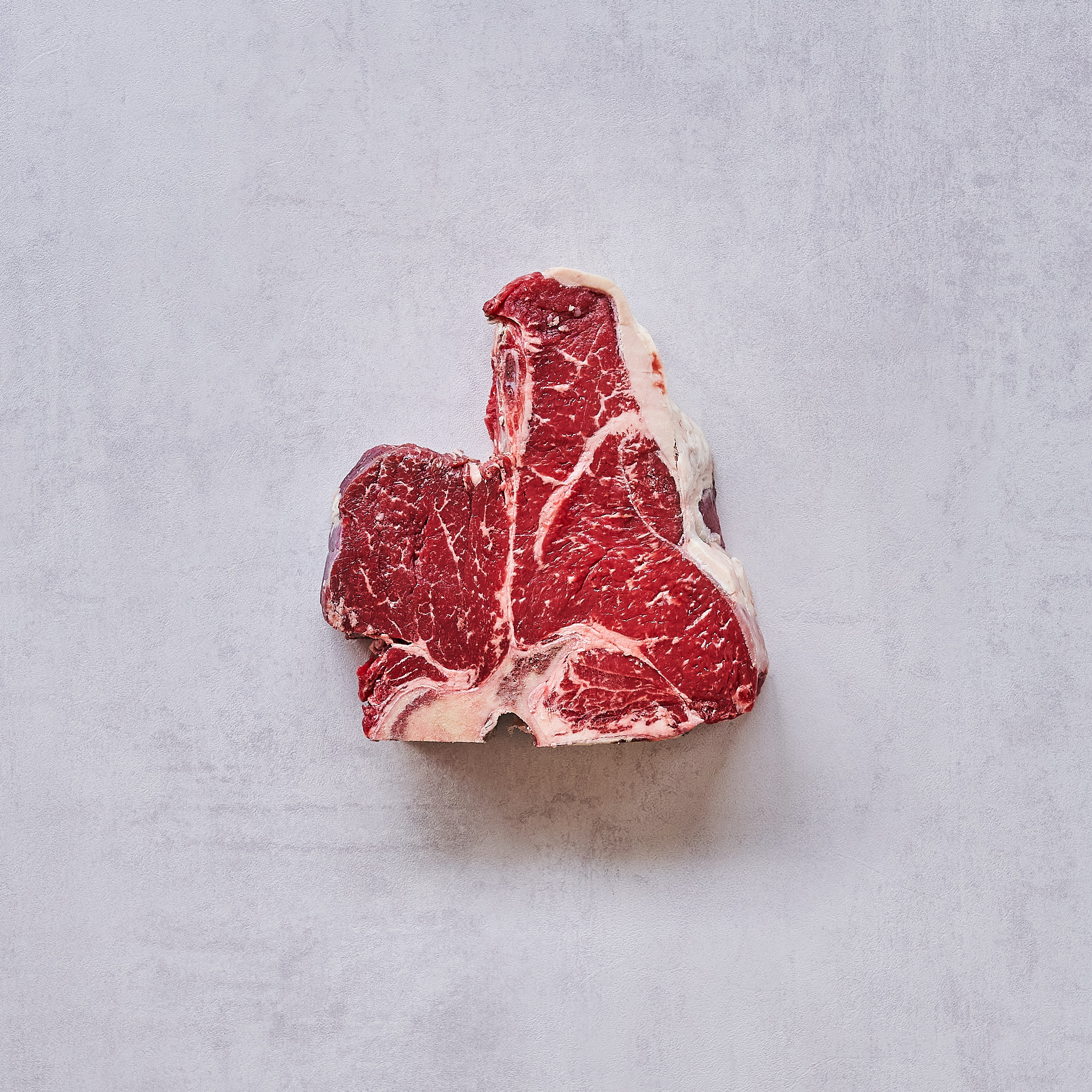 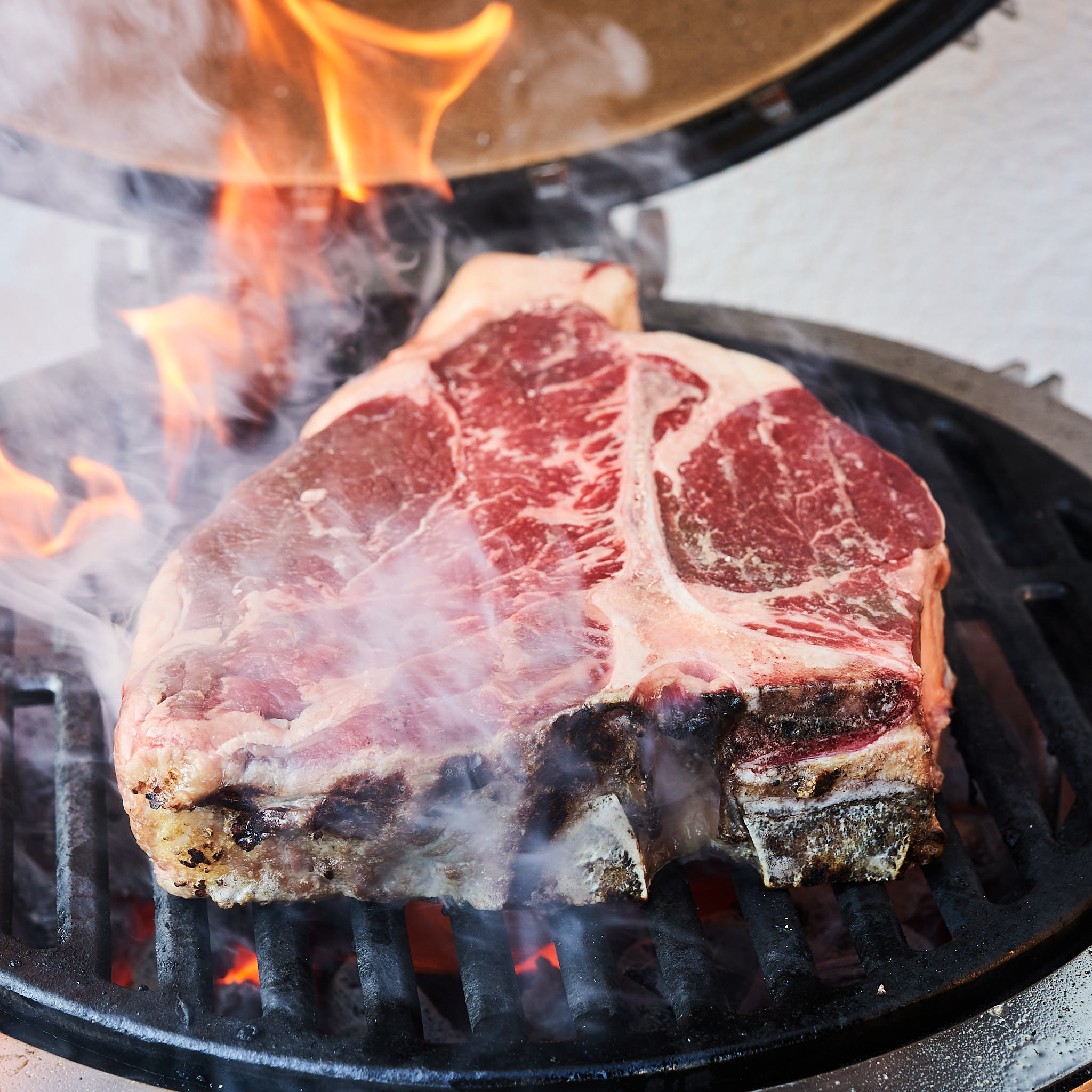 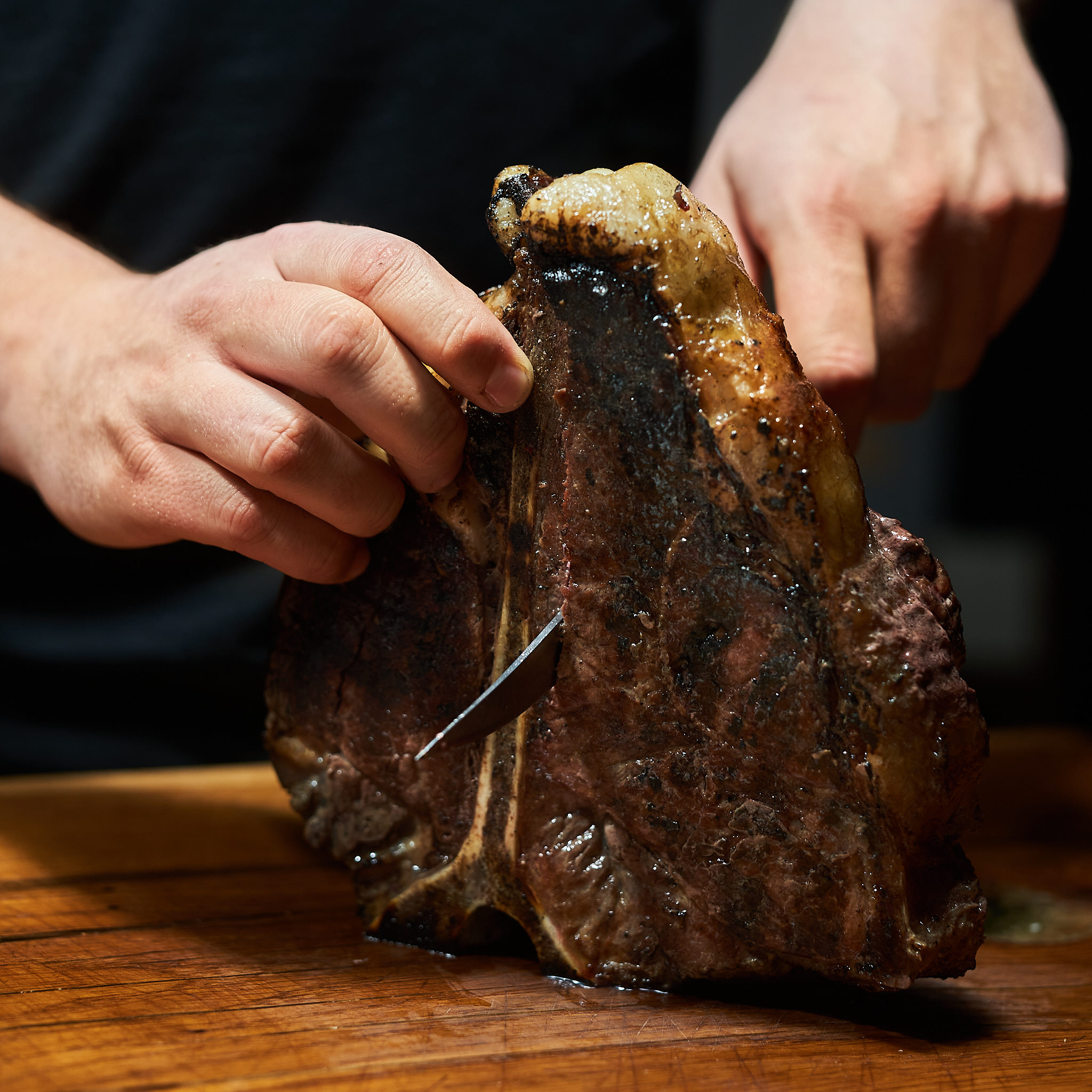 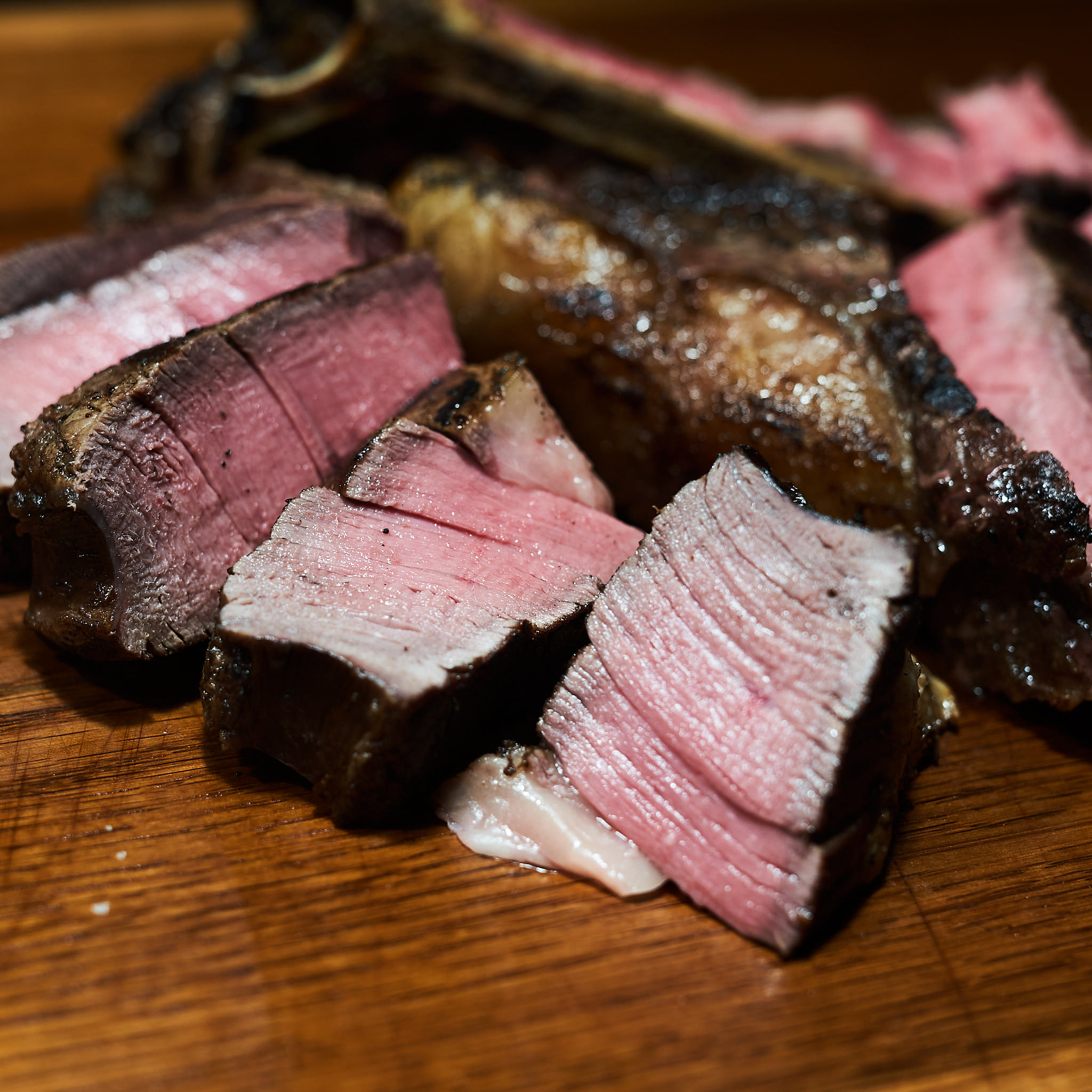 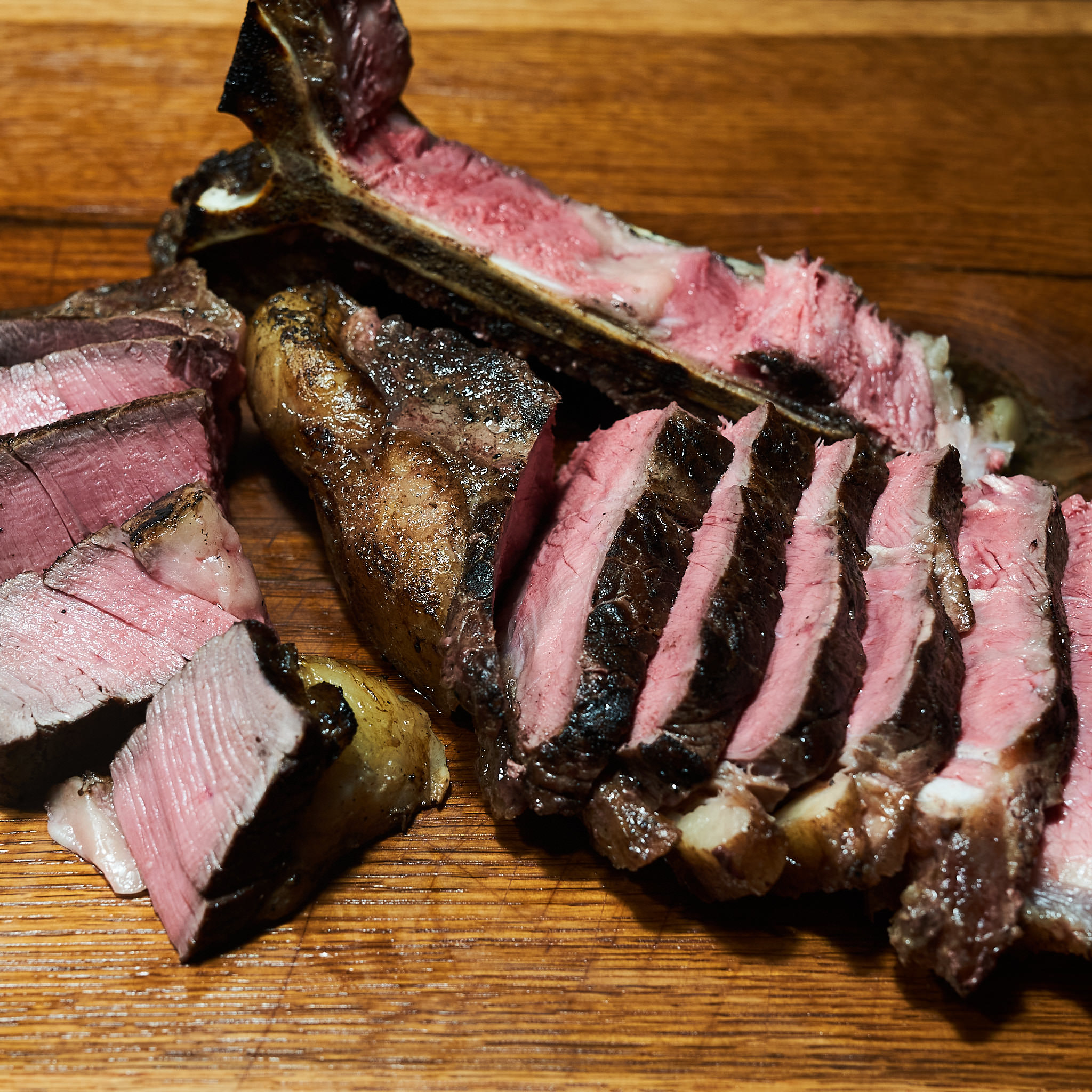 from the Austrian Heifer (heifer)

The big brother of the T-bone steak. The Porterhouse steak is cut from the middle and stands out due to the large fillet portion. The imposing bone divides it into rump steak and fillet centre. A special classic for the grill or pan.

Order by tomorrow 05:30 o'clock and you will likely receive your delivery on Friday, 12.08.2022.
Buying meat is a matter of trust. If you have any questions about the product, please don't hesitate to contact me by phone. I look forward to meeting you, your meat sommelier Sebastian.
Call now Chat now
Product number: FM101050

Our Dry-Aged Porterhouse Steak combines the best advantages in terms of enjoyment! Because here there is a perfect combination in one steak. Namely, the combination of rump steak and fillet piece and the fabulously intense flavour of a dry-aged beef! So there is something for everyone.

Romance on the grill

The rump steak or beef tenderloin side is extremely aromatic thanks to the fat cover and short fibres. The fillet is extremely tender and soft. You could say that the porterhouse steak really combines the best that the steak world has to offer. For couples, the steak is therefore the ultimate pleasure and even brings romance to the grill.

A magnificent specimen par excellence - the dry-aged Porterhouse steak is not only an imposing piece, after all it contains two noble cuts, but also a flavourful high-flyer. As a little showpiece to show off a bit on the grill, the steak also makes quite an impression.

What exactly makes our Dry-Aged Porterhouse Steak so special? In addition to the combination of fillet and Rump Steak, the steak's amazing aroma is also impressive. Due to the weeks of maturation on the bone, the meat unfolds its full flavour potential and develops a nutty buttery aroma! For the barbecue, our Dry-Aged Porterhouse Steak is the absolute final level in terms of enjoyment

How can you recognise a perfect Porterhouse Steak?

As with all cuts and pieces of meat, quality is the be-all and end-all. With beef, a number of factors play an important role. That's why we at Fitmeat pay attention to the best premium quality and source our meat exclusively from selected small farmers in Austria.

To become a fine specimen, the Porterhouse Steak from the Heifer (heifer) must be well hung and matured. A distinctive, beautiful marbling and a dark red colour are essential. We also make sure that our Porterhouse Steaks have a large fillet content.

What is meant by Heifer (heifer)?

Heifer (also known as or Starke) is the name given to female cattle that are already sexually mature but have not yet calved. This is of course also recognisable from the meat structure. The meat of a has a bright dark red colour and extremely fine fibres. When it comes to marbling, veal is an absolute highlight, which makes it extremely juicy and tender.

This special marbling is the result of the slow growth of the calves, which ensures fine fat storage. Compared to young bulls, they also have significantly less weight. The combination of wonderfully distributed fat in the muscles and dry aging gives the flavour of the Heifer a distinctly full-bodied aroma.

One porterhouse steak is enough for 3 - 4 people.