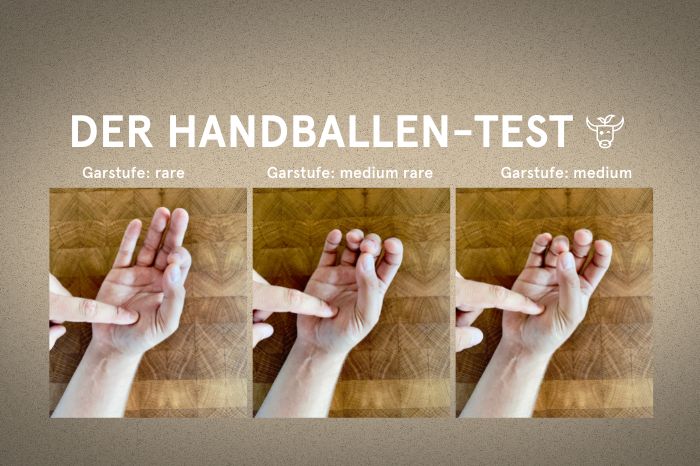 Medium or rare? The cooking levels of steak

Deliciously roasted aromas, nicely seared and wonderfully tender on the inside - that's exactly how a steak should be. Whether prepared on the grill or in the pan, the enjoyment depends to a large extent on the perfect core temperature. In addition to the high quality of the meat, it ultimately determines how ingenious the enjoyment experience will turn out to be.

For some, however, the core temperature is a kind of gamble and yes, catching the right moment can be tricky. But with a few little kitchen aids and our cooking level overview, it's guaranteed to work.

In this article we tell you everything you need to know about cooking stages and core temperatures.

An overview of the cooking stages for steaks

The Bleu cooking level is achieved by searing the steak very briefly on both sides at high heat. This produces the typical outer crust, which has a light brown colour. Inside, the steak is still almost raw, the colouring is dark red and red meat juices ooze out.

Rare means that the steak has been seared a little longer on both sides with high heat. This means that it is slightly more cooked on the outside than the bleu fried steak. On the inside, the steak is almost raw, just like the bleu version, but the meat fibres on the edge have a slightly darker colour.

Most of us know this term. In every steakhouse, steaks are served this way as standard, because most meat lovers prefer it.

Medium rare is particularly convincing because the steak has a crispy crust on the outside and is juicy and still somewhat raw on the inside. The colour of the meat is typically pink.

Some people prefer a steak cooked medium, because it is a touch overcooked. It has a nice crispy crust on the outside, it's a little firmer on the inside and all the way inside it's still very juicy, tender and pink.

This cooking level is not particularly popular with meat lovers. This is because the steak is almost cooked through, only slightly pink on the inside. No more meat juice comes out, which means that the steak is no longer as tender.

The death sentence for meat is the well done cooking stage, because here the steak is cooked completely through. The crust is dark brown and the meat juices are lost.

The steak is no longer tender. However, if the meat is of good quality, the steak should still taste juicy. Remember: If you want your steak well done, you should have a good reason for it.

The palm test for the right cooking level:

Seen from the outside, the current cooking stage of the steak is not so easy to recognise. Therefore, it often happens that the meat is cut to check whether it has already reached the right stage, just to be on the safe side. Unfortunately, this is quite a big mistake. This is because the meat juices are already leaking out and the steak would dry out during further frying or grilling.

To test the cooking level without cutting the meat, there is the ingenious palm test. To do this, bring each finger of one hand to your thumb and press together very lightly. With the other hand you can now press on the ball of your hand.

Now compare this "counter-pressure" by pressing the flesh in slightly. If it feels the same, you are on the right track. 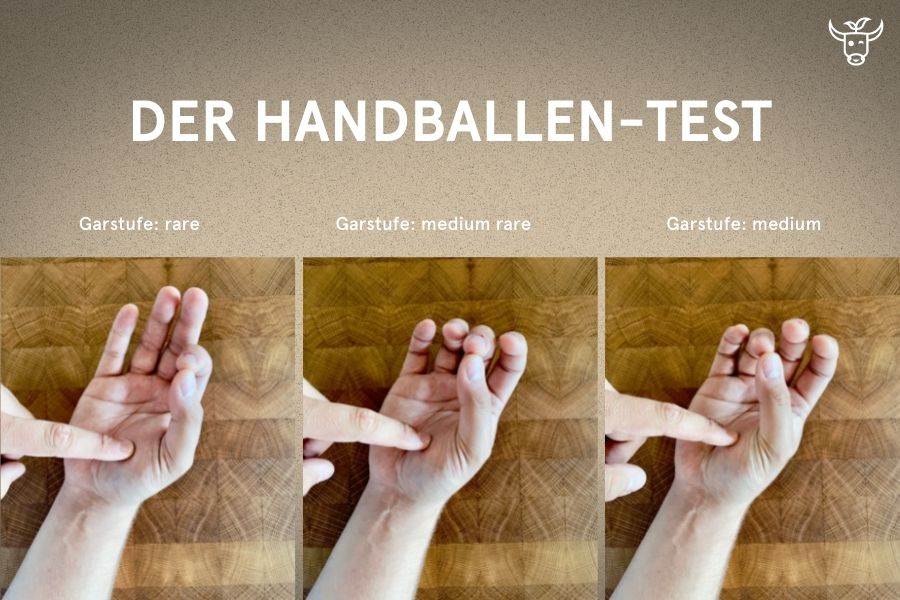 Equipment for a perfect steak

Reasons for a core temperature gauge

The palm test is of course a quick way to test the cooking level, but it is not exact. If you press too hard or too lightly, the result can be falsified. That's why we advise you to use a core temperature gauge. For us, this is the easiest and most uncomplicated way. If you don't have one at home yet, you are welcome to order one with your next order.

How to use the core temperature gauge correctly:

Insert the needle of the probe thermometer into the steak from the side (parallel to the grill surface). Depending on the desired cooking level, set the core temperature gauge correctly.

The perfect core temperature for every cut