Sous vide cooking is a "trendy preparation" that is no longer only used by the absolute top chefs, but is also finding its way into domestic kitchens. Why? Quite simply, with this preparation you get the ultimate perfect result, every time! Reason enough to take a closer look at this technique.

What does sous vide actually mean?

"Sous vide", which translates roughly as "under vacuum", is a technique developed by French chef Geroge Pralus - and that means in the 1970s. While the technique was still considered extremely experimental at the time, it is now a common method among top chefs.

But what exactly is sous vide cooking all about? Generally speaking, it is a particularly gentle preparation of meat, fish and vegetables that achieves impressive results. This is because instead of being cooked in a pan, the meat is first prepared in a water bath.

It is, so to speak, a further development of low-temperature cooking in the oven, but without the well-known disadvantages.

How does sous vide cooking work?

In sous vide cooking, the meat is placed in a vacuum bag in a water bath and prepared at a constant temperature of no more than 100 °C. The meat is then placed in a vacuum bag. This technique allows the heat to work much more effectively and penetrate quickly into the interior. With hardly any other preparation is the control of the temperature or the degree of cooking so precise.

The beloved roasted aromas that are necessary for the taste of a steak are obtained by brief, very hot searing at the end of sous vide cooking. To do this, the meat is removed from the water bath and the vacuum bag and seared over very high heat in a pan or on the grill.

This combination of slow sous vide cooking and subsequent short roasting at high heat is probably the best way to prepare a fabulous steak.

The cooking process itself takes care of itself, as long as you have a thermaliser or immersion circulator at hand and know about the perfect core temperature. Because this technique makes it possible to bring the meat to the optimal temperature without running the risk of overlooking the cooking time. 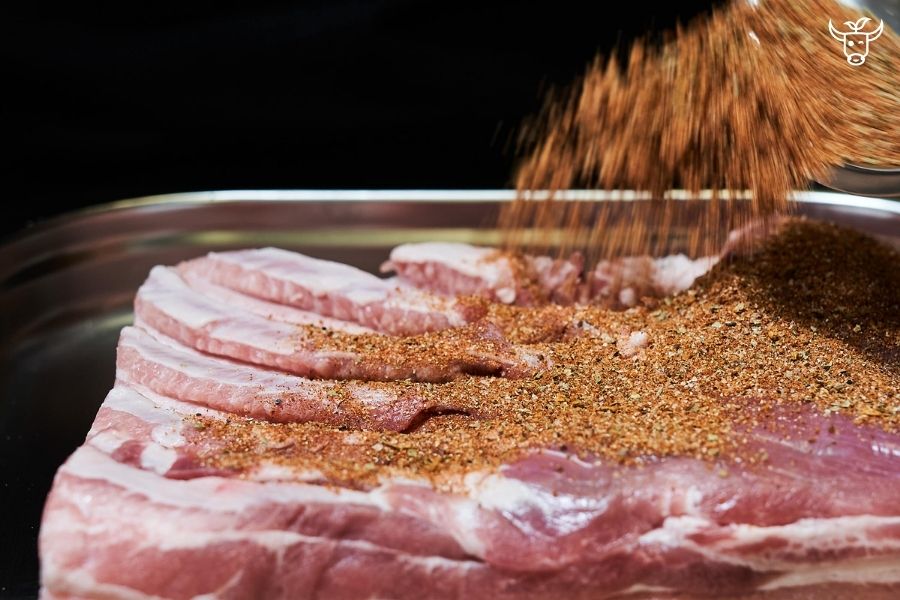 How long does meat need in sous vide?

When cooking sous vide, the meat is cooked for several hours in a water bath. The optimum cooking time naturally depends on the thickness of the steak. Of course, this is not always easy to find out.

But there is a cool rule of thumb: for every 1 cm of thickness, the meat should be cooked in the water bath for at least one hour. As already mentioned, however, nothing can go wrong thanks to this technique. Because the meat cannot overcook at all.

So much more important than the exact cooking time is the optimal temperature! This should always correspond to the perfect core temperature of the respective meat.

A nice beef steak needs a core temperature of about 56 °C. The water bath should also have exactly this temperature (minus 2-3 degrees if it is to be seared later).

While the steak, wrapped in the vacuum bag, is now stewing in the water bath, the core temperature rises evenly. Within 1 to 2 hours, the steak has reached the optimum degree of cooking. And this is where something really ingenious happens: because it is practically impossible for the steak to dry out or overcook, as this is regulated by the water temperature.

So while you have to catch the perfect second when preparing the meat in a pan or on the grill, with sous vide cooking it can be left in for two to three hours longer.

When the time comes, simply remove the steak from the water bath and sear it on both sides at 300 °C for about 20 seconds. Et voilà - there it is, the perfect steak!

Expert tip: Try out the cooking times! A steak with 60 minutes of sous-vide time tastes different from one with three or six hours. Or try the legendary 24-hour sous-vide pork belly!

Here is an overview of the optimal core temperatures for sous vide cooking:

The ideal sous vide cooking times at a glance:

In addition to the fact that you can achieve absolutely ingenious results in terms of cooking level and have full control and are also more flexible in terms of time, there are other advantages that sous vide cooking brings with it.

The gentle preparation in the vacuum bag ensures that both flavours and nutrients are completely preserved. In addition, no liquid can escape from the meat, which keeps it fabulously tender.

Cuts with a high collagen content are particularly suitable for this method. The slow preparation transforms this into a flavour carrier in a class of its own. The connective tissue becomes extremely tender and juicy, which means that the meat simply blows you away. 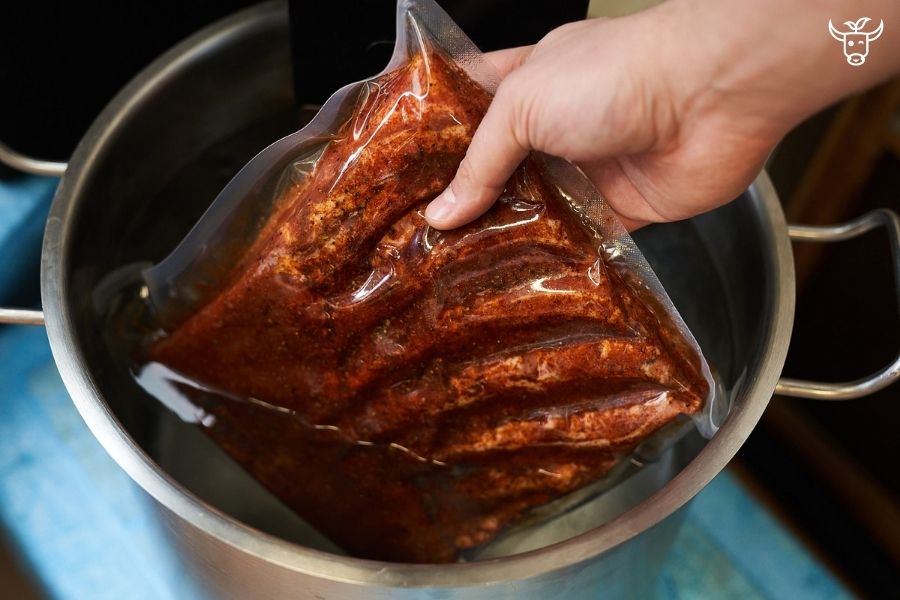 Sous Vide in the oven - is it possible?

One thing first: the sous vide method is basically a further development of low-temperature cooking in the oven. Nevertheless, it can of course also be prepared in this way.

If you don't want to use additional sous vide equipment and utensils, you can simply use the technique in the oven.

Fill a large pot with water and bring it to the desired temperature. Then place the pot in the preheated oven and check whether the temperature is kept constant. If this is the case, the steak can then be seared again.

When cooking sous vide in the oven, however, there is one thing to bear in mind. The temperature fluctuation can be much greater here. For a first-class steak of high quality, a slight deviation is not serious, but we would advise against it for sensitive products such as fish.

All in all, the technique of sous vide cooking is clearly more than just hype. The advantages and first-class results it achieves make it one of the coolest preparation methods for enjoying steak in a class of its own.